As the Kent Hovind trial enters its first day, I hear two voices inside me. (That's a metaphor, by the way, I don't really hear voices.  At least not very often.) One is my inner investigative reporter that hopes for the story that I have been covering for over two years to break into the mainstream.  I picture myself in a battle of wits with my possible cousin on Fox.  The other voice  is that of the inner good citizen that hopes that Kent Hovind's trial will go off very uneventfully with an outcome that is not very harsh on  Kent Hovind that cannot be plausibly considered a victory for the tax denial movement.

In the latter outcome Rudy Davis, Ernie Land, Wiley Drake and Dave Daubenmire will move on to other bat shit crazy causes.  Maybe Rudy will take up the cause of the Mercator projection and start preaching that those revisionist maps with a much larger Africa are the work of the Jesuits. There will be no more martyrs produced for the Christian community.

At the moment, it appears that the inner good citizen is the one who is happy.  Last night the conclave of Hovindicators under the blood of Jesus at the Red Roof Inn consisted of eight. 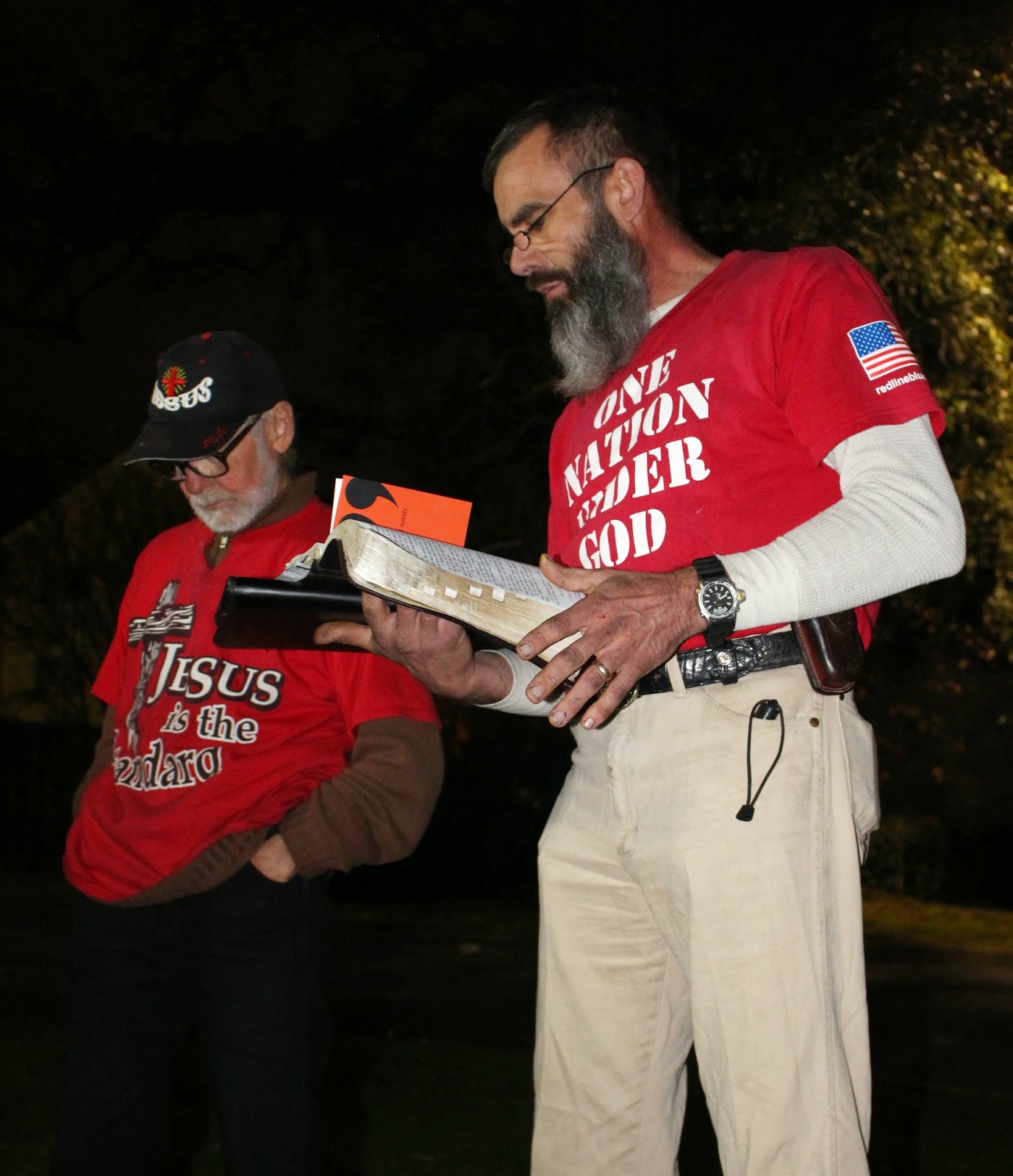 By the count of Jonathan Schwartz there were 15 on the courthouse steps this morning including Rudy Davis.

What is encouraging about this is that it may well reflect that the religious right in the United States has a limit on bat shit crazy and that Kent Hovind is a bridge too far.  Reverend William Thornton who is my go to guy on all matters evangelical has not seen any Hovind coverage other than what I provided him.  So it may well be that Hovind ownership on the internet only encompassed a rather small echo chamber.

Nathan Zamprogno, a conservative Christian from Australia, has been watching the Hovindication struggle with horror.  He recently commented

On behalf of the overwhelming majority of Christians in the U.S and world-wide who think Kent Hovind is a creepy scam artist, and a tax-dodging thief, I want it known that the Alan Hoyles and the Ron Brocks, to say nothing of the Rudy Davises, the Ernie Lands and the Dan Bidondis... don't speak for us, and we're ashamed that they would claim the disguise of Christian faith in order to peddle their support for Hovind and defy the lawful government of the United States. Shame on them all.


It looks like "them all" is pretty small group, which is pleasing the heck out of my inner good citizen.

The reporter is staying on the story,
Posted by Peter Reilly at 11:59 AM