Lenox, Alabama isn't home to much. But starting Saturday April 21, it became the destination for Hovind followers and those who reject the theory of evolution with the grand re-opening of Dinosaur Adventure Land.

After Hovind was arrested in 2006 on several tax related charges including structuring, Dinosaur Adventure Land in Pensacola struggled to stay open and then slowly fell out of existence. Upon leaving prison after completing his sentence and being acquitted on new charges in 2015, Hovind searched for his next move. A connection through Ernie Land donated 140 acres of property in Repton, Alabama to Creation Science Evangelism Ministries Inc and the new DAL was born.

To get to DAL, visitors travel down a dirt road and wind up at the entrance gate featuring Dr. Dino and Mrs. Dino, seemingly a rendition of Mary Tocco before the two split. 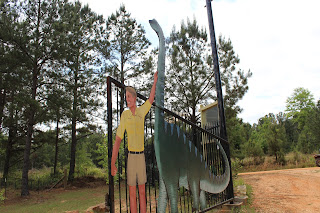 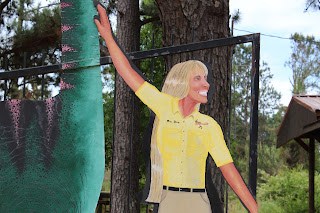 The park has no insurance and warns visitors to enter at their own risk.

On opening day starting at 10:30 a.m., visitors enjoyed the creation museum, playground area, and a donated lunch of BBQ pork and Chobani yogurt accompanied by Danish pastries. The main event would be held at 2 p.m. - water baptisms in the pond.

But DAL isn't complete without the creation museum. The center takes visitors through the six days of creation according to the Bible. The tour guide emphasized the spiritual metaphors behind each scientific demonstration. Near the end of the tour, our guide stopped in front of a wall of posters and news clippings about the existence of dinosaurs among mankind. She told the audience that dinosaurs such as pterodactyls are still in areas of North America today.

Outside, Hovind directed volunteers, interacted with children on swing sets, and drove a four wheeler across the premises. He said the biggest challenge with this project has been money. They’ve spent all they raised and more, mostly relying on donations. His resources have been less than he would have hoped, which Hovind says is the result of churches abandoning him post-prison sentence.

For his critics, Hovind had a few words.

“What are you doing for the Lord?” Hovind asked. “If you don’t like what I’m doing, do something better.”

Near the end of the grand re-opening at 2 p.m. volunteers and visitors alike gathered at the pond for the baptisms. Volunteers parked their golf carts and four wheelers on the shore. Under a pavilion, nearly 25 people sat in rows of chairs and listened to worship, followed by Hovind wading waist deep in the water as adults and children took their turns. 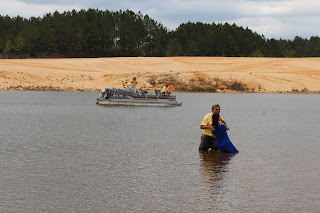 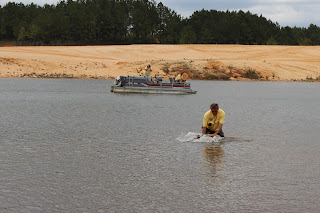 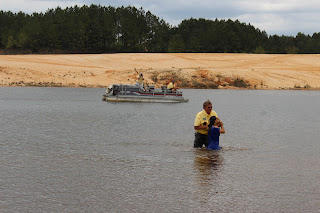 After the baptisms, Hovind invited guests to stay and explore the property until 5 p.m. He also asked them to spread the news about his new 777 club. The goal is for 777 people to donate a dollar a day for a year, or $31 a month, to Creation Science Evangelism. He noted you could sign up for people and boasted one donor had signed up under Bill Nye.

By 3 p.m. nearly 70 people had visited for the grand opening, not including children.

Hovind’s tax past wasn’t completely overshadowed by the dinosaurs. Visitor Leslie Johnson came with his family to support Hovind, but he originally learned about him because of his structuring charges and imprisonment.

Jessica Gunther brought her family from LeFayette, Georgia to support Hovind. She was aware of his past with tax-related charges but said she doesn’t think it was Hovind’s fault for what happened.

“I think the government was looking for something,” Gunther said. “He was spreading too much truth.”

Underlying the playground and dinosaurs at DAL is a subculture of Christianity. To follow Hovind and his teachings about God and creationism means to know the truth as no one else does. For Hovind's followers, the renewal of Dinosaur Adventure Land is only the beginning for the restoration of Creation Science Evangelism.

Hovind’s reach is wide and deep. Every volunteer and visitor said they had first heard of him from his video series or YouTube channel. Every supporter spoke highly of the way Hovind portrayed his message in love. For them, the message is the solution to the evolution question and motivated them so strongly that many traveled hours to see DAL and support Hovind.

Their devotion to Hovind is profound. They see no flaws in him. Instead, they view him as a man intensely persecuted for his beliefs. These supporters seem to be drawn to Hovind, but with a greater purpose of spreading God's truth in mind. The line between adoration of a man and his message begins to blur.

Is Creation Science Evangelism's DAL simply a display of a bizarre subculture of Christianity or is there something more to it?