Abigal Meggisnson, with support from Interlock Media was on the scene last Friday when Kent Hovind's co-defendant Paul Hansen was sentenced for contempt of court.  In Abigal's report we get a rich picture of the scene that day that I have designated the end point of L'affaire Kent Hovind.


Hansen was convicted in March of contempt of court -  intending to cloud the sale of former Dinosaur Adventure Land property and failing to appear for fingerprint and case prints when subpoenaed.

The sentencing began at 2 p.m. at the Winston E Arnow Federal Building in Pensacola, FL with a calm presence outside the courthouse, without a protestor in sight. 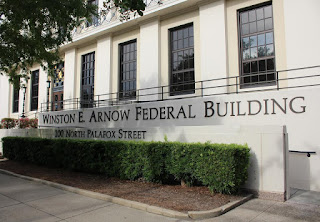 Inside, supporters and reporters filled in to witness the sentencing. Kent Hovind entered the courtroom accompanied by his friends and advisors Ernie Land and Josh Jocelyn.

Kent, Ernie and Josh would provide a video report of the event not long after its close.

Rhonda Herrington entered clutching a Bible and sat in the pew directly behind the defense. She came to report the sentencing for her pastor James David Manning’s internet radio show. After Hansen was brought out in chains and an orange jumpsuit, she knelt on her knees in prayer with her head bowed.


A court official interrupted her to let her know she would have to rise for the judge, to which Herrington asked, “Is it against the law [to pray in court]?” The court official was kind and simply asked for her cooperation and to be included in the woman’s prayers too. Despite the minute resistance, she did rise once the judge entered and sat in her seat once again clutching her Bible for the rest of the sentencing.

At the hearings in May, when Hovind's conviction for contempt had been dismissed, Rhonda had been a presence on the street in front of the courthouse.

Judge Casey Rodgers entered the courtroom. She allowed Hansen to address his objections, comments and concerns regarding the pre-sentence report and sentencing guidelines. Hansen's primarily put on  sovereign citizen arguments which he spouted with his hands twitching nervously behind his back.

Hansen first objected that the term in the pre-sentence report, residence, was inaccurate when referring to his home in Nebraska.

Hansen further claimed that he had been misinformed of the consequences of mailing the letter to the title attorney’s office. He said he had received a notice that stated he would be in civil contempt if he mailed the letter, but it did not warn him of criminal contempt of court. He said he would have taken the matter more seriously if he had known. Hansen asserted that he was planning on suing whoever had misinformed him, but Judge Rodgers was quick to steer him back towards the subject of the day, his sentencing.

Later, Prosecuting attorney, Mr. Ryan J. Love,that Hansen had sufficient notice of the consequences of his actions. Judge Rodgers informed Hansen that the jury had already ruled that he had proper notice.

A face not in the courtroom that was missed by Hansen was IRS agent Schneider. When he addressed his issue, he looked around the courtroom hoping to see Schneider. Hansen noted that he had made efforts to request that Schneider be subpoenaed for the sentencing but was not advised by Klotz to do so and had not filed the request himself in due time. The Judge made the statement that based on the fact that he would not have brought any new information to the sentencing, it would have been denied anyway.

Repeatedly, Hansen stated that he only mailed a letter and did not file it to the county clerk’s office for the extra one dollar. This would have been filing a lien on the property, a much more obvious and serious attempt to cloud the title. He wanted the court to know that what he didn’t do was just as important as what he did do.

During the two and a half hours of sentencing, Hansen continued to claim that it didn’t matter what the intended harm was, as long as no harm came about. It was okay since the properties were selling well and the family would be in a comfortable position.

Judge Rodgers stated several times that Hansne had already been convicted of intending to cloud the sale, and intent was all that mattered.

Although Judge Rodgers has allowed Hansen to continually challenge the U.S. authority, she said she flat out disagrees with them. “It’s nothing personal… it’s my view of the law”

Hansen brought two character witnesses up to the stand: Kent Hovind and Ernie Land. Both testified to Hansen’s faith and his intent to do the right thing for his country.

Kent Hovind said he had known Hansen for over 10 years and spent significant time with him including three months in a jail cell. He testified to his godly character and good intentions. Hovind also gave his perspective on what Hansen’s sentence should be, “In my opinion, you should go home today.”

Ernie Land was also called to the stand. He denounced his own American citizenship while wearing a patriotic button up shirt boasting an American flag and We the People followed by the rest of the constitution. He stated that today’s U.S. citizen is not what was originally intended by the founding fathers. Mr. Love questioned him on the community courts of today. Land answered him saying there are many coming up across the nation, including some in South Florida and even one in Pensacola.

Hansen began his final statement by speaking of the hardships he has experienced in prison already and how he wished to go back home to his family. He said there was no evidence of a cloud on the property and no upset of the sale of it either. Hansen said that if he had known that he would’ve spent even one day in jail, that he would have never sent the letter.

Hansen expectedly, asked the judge for time served. “I don’t want to go to prison for 6 years for mailing a letter,” Hansen said.

He then humbly apologized for his ignorance. The Judge was confused by his apology and asked what exactly he was apologizing for. He ended up saying it was for "accidentally" committing a criminal act and his overall ignorance.

The closing statement from prosecution featured Mr. Love detailing the benefits that come with being an American citizen, yet Hansen still has claimed these benefits after repeatedly denouncing his citizenship. Love additionally noted that this case was not nor has ever been about faith. If he and his associates were to sit down with Hansen and Hovind, he said they would be shocked to see how similar their faith really is. He asked the judge to adhere to the guidelines and give Hansen 47-56 months in prison and “no greater than what is necessary.”

udge Rodger’s decision was a swing in Hansen’s direction to promote a respect for the law, she sentenced Hansen to 18 months in prison, giving him credit for the 10 months he has already served and 3 years supervised release.

She disagreed with the guidelines due to Hansen’s criminal history category. He had scored a 5 out of 6 which Judge Rodgers felt “over represents the seriousness of his crimes”

Mr. Love’s argument regarding Hansen’s beliefs became irrelevant, as the judge said, “We do not punish people for their beliefs. We do when those beliefs turn into harmful actions”

Judge Rodgers addressed Hansen and explained that the most dangerous thing to our society is when one individual takes action against the laws that apply to everyone. “You’re not special, you have to follow the same rules everyone else does,” she said to Hansen.

Hansen asked to finish his time in the Federal Prison Camp of Pensacola. The Judge agreed to recommend that facility, though she said she could not promise that he would end up there.

After court was dismissed, an unsettled Kent Hovind stood outside and said, “That should’ve never happened. The court should be apologizing to him [Hansen].”

I really appreciate Abigails sharp observation of the proceedings.  Hansen is unlikely to be released while he appeals, which actually may be to his benefit, since under current conditions he is sure to be free in the Spring. Hovind continues to call for reversal of his 2006 conviction, but it seem unlikely he will get any traction.  Hovind has not preached tax protester theories in a long time. He is now focused on "end times".  I suspect that he will be conventionally tax compliant.  The second prosecution of Kent Hovind turns out to have been a waste of government resources and not to have been in the interest of promoting tax compliance as it seems to have emboldened his supporters in their alternative views.  Regardless, I'm glad that Kent Hovind is out and that he seems to be mainly focusing on his Gospel message.