Lunch At The Drowsy Poet With Eric Hovind

I hadn't planned on writing about my get together with Eric Hovind or even telling anybody about it other than my partner.

At the end of our time together, though, he indicated that he didn't mind if I wrote about it, so here is my report.  I'm going to assume my readers have all the background of who's who, but if you are interested you can always google.  I see the main audience for this piece as being what Marry Tocco harshly but fairly refers to as:


obsessed party of internet fanatics who invest an impractical amount of time and focus,dedicated to revealing to the world their perception of Kent as a fraud and con-artist. 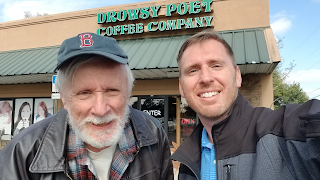 Hanging In The Drowsy Poet

Evie and I were staying about an hour east of Pensacola, so I arranged to meet up with Eric at the Drowsy  Poet, which Jonathan Schwartz had told me is the go-to place for Pensacola evangelists.

We were meeting at noon, but I made a serendipitous error.  When we crossed the time zone line, our phones knew about it but not our computers, which is what I went by when I took off from the state park.  So I got to drink in the atmosphere of the Drowsy Poet for an hour.  There are actually a few of them, but I went to the mothership, which is not far from the Creation Today office.

There is a narrow corridor to the counter where you order as you come in and then a pretty spacious room with about six or eight tables of varying sizes.  I posted myself at a high one with my coffee and cake.

I think the table next to mine was having a church planting discussion, but I'm not sure.  More fascinating was across the room.  It was the middle management of the Drowsy Poet empire. Four youngish women and a two-year-old boy, who was probably the star of the table.  I learned a lot about the personnel problems you run into in running a coffee shop.  Did you know that it matters what order you pour the components into the mixture and that there are some people who just don't get it?

Anyway, Eric showed up at noon along with another fellow.  I don't remember his name, so I'm going with Jim (That might be right).  Jim seemed a bit younger than me (I'm 67) bit older than Eric.  Jim was almost entirely silent only speaking when I addressed him directly with questions.  He is a welder and the big impression he has from the case is the judge's "Worse than rape" comment.  God, that has gotten a lot of attention.


Since it purportedly happened during sentencing, it's hard to see what difference it made.

One of my problems in being a good interviewer is that I like to talk too much and Eric was asking me a lot of questions.  It seems like he has not really been keeping up on developments or reading my blog, so I filled him in on quite a few things.

At one point I told him that I mainly got information from Ernie Land and that I was disinclined to talk to Kent, because the impression I got from my one interview with him is that he only wants to debate rather than discuss things.

And at this point, I will tell you the personal issue that makes me particularly sympathetic to Eric.  My father died when I was 13 and I always have an envy for adult men who still have their fathers. I believe that not having a father during that crucial period in life accounts for issues that I have had with maturity.

Then I contemplate Eric who picked up the torch when his father went to prison and supported his mother, who finds himself condemned when his father is released.  He told me that he still catches flack for that whole debacle.

Apparently, he and Kent can't just agree to disagree on certain things and have a family relationship.  So he understands my reaction to talking to Kent.

Mostly we talked about Jesus and creation.  The resurrection of Jesus changes everything and he was telling me about the historical evidence that is piling up to support that.  I told him that I thought that the extra-biblical evidence about Jesus is pretty thin.  He gave me a thumb drive which I haven't checked out yet.

The big piece of evidence is this tablet with a decree about not messing with dead bodies for nefarious purposes.  I looked into that a bit and I don't find it that compelling as evidence of the Easter story.  When I ran this by my facebook buds, one of them who is a devout Catholic responded, referring in particular to Eric's comment about the resurrection changing everything

To a great extent, that is the center of it all. If you believe that, then, I don't need to find writings from several professions that did not exist at the time but can trust the oral recollections (collected 20 to 40 years after) of a society that valued memory and oral retention. If you don't believe in the resurrection, then you are just wasting your time.

It reminds me of Father Murphy, who taught my high school freshman theology class.  He would draw a long line on the blackboard and then put a cross roughly in the middle and say "History is Christocentric".

I told Eric about all the crosses in our classrooms.  And he said that Jesus was still on them, but the Protestant crosses are empty, because of the resurrection.

Anyway, I sometimes envy people who have faith.  My friend who has a much stronger secular education than Eric is not going to trouble himself the way young-earth creationists do about extra-biblical evidence that supports a hyper-literal reading.

I asked Eric if he was theologically aligned with Kent.  Apparently, there is this issue with repentance that I've heard about from other Kent critics, but never quite nailed down.  Other than that, I could not detect anything to indicate that Eric is doing anything other than following in his dad's footsteps when it comes to evangelism.  And unlike his dad, he does not expend energy on other issues.

Eric is very worried about what the IRS might have in store for Kent and his mother.  Apparently, Jo is not burdening Eric with whatever she is doing to deal with the situation.  I told him about the statute of limitation on collections which might be Jo's light at the end of the tunnel, but I don't know collections well enough to know whether there are exceptions to the exception when there are criminal issues involved.

All in, Eric strikes me as a fine person. I hope that the "obsessed band of internet fanatics", who include some of my favorite people and with whom I can well be counted, will lay off him.

In an earlier version, I referred to the coffee shop as The Lazy Poet, which is really lazy of me, since I could have just looked at my new coffee cup to confirm the name.