It takes a Jersey girl, or in this case, a transgender woman, to not only have the bravery to come out on national television, but to drop the F-bomb as well!

So I'm going off topic entirely here to shamelessly exploit a celebrity connection to improve my traffic.  I mean what's the point of knowing a celebrity if you can't get traffic out of it?  At my recent grammar school reunion, there were connections to some of the most famous people from Fairview, NJ.  Lucia Scarnecchia was there and her uncle (or maybe great uncle) until this month had been the most famous person from Fairview.  John Scarne was an expert on, among other things, cheating at cards, which was kind of fit being the most famous person from Fairview.  Fairview was known as something of a gambling center back in the day.

Father Charles McTague, himself now famous, often told us about John Scarne, who also invented the game Teeko, Father McTague was with us in spirit.  If you are into jazz you may have heard of Mary Lou Williams.  She was not from Fairview, but the Jesuit priest who was her manager and preserver of her heritage Fr. Peter O'Brien SJ was.  If you attended St. John's in the fifties or sixties, you probably had an O'Brien in your class.  Well my brother, sister and I all did anyway.  My brother was in Peter's class and Patrick was in mine.

As it happens, though, at the very reunion was someone poised to blow the doors off Fairview famous.  That would be Julia Scotti who recently appeared on America's Got Talent where in a one two punch of sorts she dropped an F bomb and outed herself as transgender 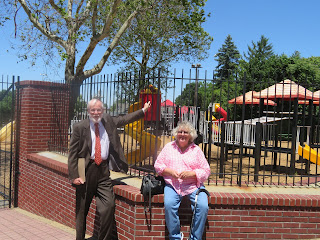 And here we are along with Patrick O'Brien getting ready to go to the 11:00 AM Mass that was dedicated to our class 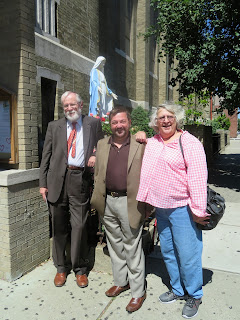 And here is the whole 20% of the class that made it to the reunion along with two Franciscans who are kind of standing in for the sisters who taught us, who are all, you know, dead. 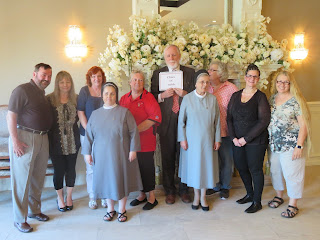 I don't know if the game of "Where's Julia" will ever catch on, but here we are in the third grade if you want to give it a shot. 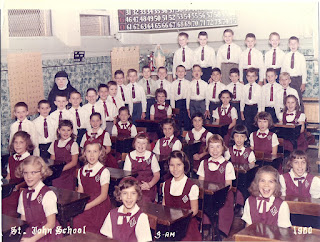 A Bit Of Controversy

I connected with Julia a couple of years ago through facebook.  Oddly enough around that time I had become interested in some of the views of radical feminists.

What is intriguing to me is that it some ways there is an illustration here of one of the things the radfems often refer to.  The parochial grammar schools were extremely gendered such that boys and girls lived in close to parallel universes.  Oddly enough the nuns, who some said favored the girls, had elements of radical feminism about them.  That sounds like a joke, but there is probably a serious topic there.

Regardless, I think what a radical feminist might remark is that Julia did not experience girlhood.

Julia and I had a bit of discussion about that and she ended up doing a blog post about it.  Here is how it closes.

And so in closing, I believe that the growing number of visible, vocal trans people are questioning and redefining gender all over the world. I believe that in the next three or four generations, acceptance of  the gender continuum will make the current absolute definition archaic. I believe that in time, trans people will have trans role models to look toward and the desire to feel or be 100% female will disappear. Finally, I believe that someday, many will look at the trans community with some degree of envy because we who were blessed with this very natural way of being have the decided advantage of seeing, feeling and actually living with the points of view of both genders. Already, scientists are pointing toward genetic and chemical causes for gender dysphoria, itself a misnomer as it implies being trans as negative. Ask any trans person how they feel after coming out and the answer is more likely to imply euphoria than dysphoria. And who needs radical feminists for validation? I am happy. That is validation enough.


I remember this period of time when I was involved in the governance of a church that seemed to be a perpetual hotbed of content free conflict.  Somebody told me that my problem was that I was an Aquarian and wanted everybody to get along.  I also have this tendency to learn about what position various groups maintain by looking at what they write rather than what is written about them.

What Is With This "Old" Bullshit?

On a really serious note, not, though, I have to call Julia out on the ageism in her routine.  Seriously, I don't really feel that old. As a matter of fact I am kind of experiencing a second adolescence, although this one is definitely more fun.

We don't know yet whether Julia's success on America's  Got Talent will turn into the fifteen minute type of fame, but at least for the moment I think she has edged out John Scarne.  So now we have somebody who is famous for dropping an F-bomb rather than knowing how to cheat at cards.  That's Fairview for you.

By the way when it comes to Fairview famous in contemporary entertainment, Julia is also competing with Ripface Invasion. You can be the judge.